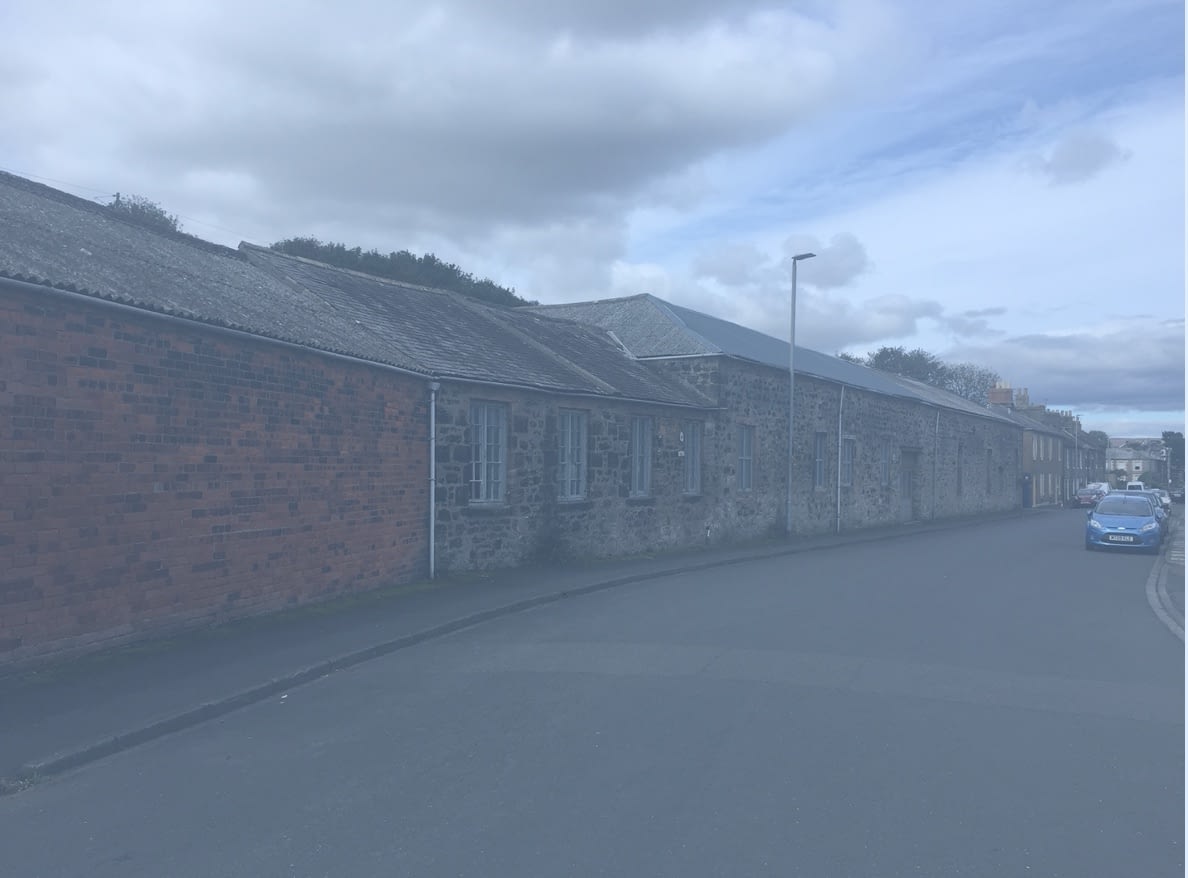 At Ford Forge the business relied on the River Till to produce the necessary power to drive the machinery and was therefore reliant on the amount of water in the river.   Periodically of course the river levels would drop, and power reduce, (also adversely the foundry was liable to flood), curtailing production in both cases, so in order to enable expansion, it was decided to move to Spittal where there were ample supplies of coal for steam power and better opportunities for marketing the products.

Therefore on 23rd June 1855 some 40 men arrived from Ford Forge to set the new machinery in motion and in the short space of four hours, had produced seven dozen spades.   In celebration, all those involved in setting up this new venture, 66 in total, were treated to a meal presided over by a member of the

The Sea View Works at Spittal presently occupied by Martins Printers, were built in the early 1850s by Thomas Black & Sons, who already had a well established business at Ford Forge, producing spades and various other agricultural machinery. The business was established at that time at the site of the present Heatherslaw Railway. 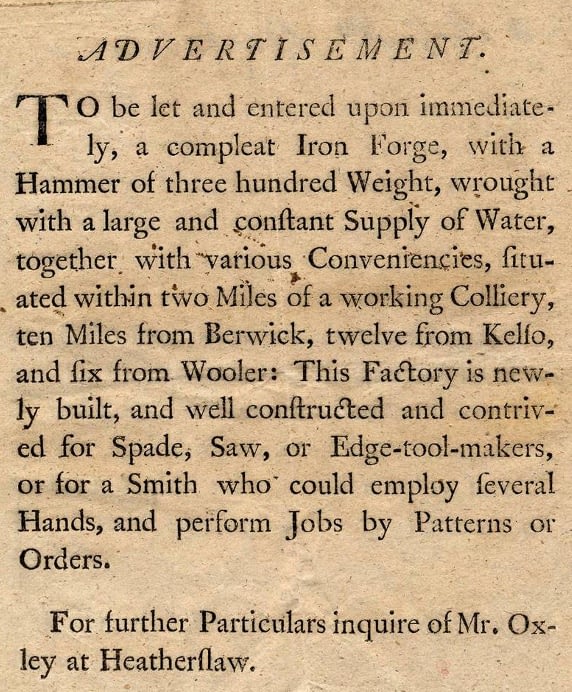 Black Family and followed by various amusements until it was time for the men to return to Ford where the original business was continuing.

The Sea View Works was a substantial building, forming three sides of a parallelogram. Three new engines were installed, made by James Scott of Tweedmouth, and the new boilers were made by John Black of Tweedmouth. There was also a Manager's house, and several cottages were being built for the workmen.

Thomas Black died in 1856 and was succeeded by his son George, who had moved to Berwick and was a Justice of the Peace, but died suddenly in 1890. By that time he was living in Castle Terrace. After that the business was carried on by members of the family living in the Ford area.

In December 1902, the local newspapers announced that Thomas Black and Sons, Ltd., has just been registered with capital of £11,500 in £10 shares to acquire on the terms of agreement to John Black, the business carried on as Thomas Black and Sons, and to carry on the business of spade, shovel, mining and other tool and agricultural implement manufacturers, iron and steel founders and forgers, &c.   The subscribers are J. Black, Ford Westfield, Cornhiil-on-Tweed, Farmer; J. Black, Jun., Spittal, Berwick, Spade manufacturer Mrs M. F. McLachlan, 21 Merchiston Gardens, Edinburgh; Mrs M. A. Hadley, 72 Morningside Drive, Edinburgh; J. Hills, 171 Main Street, Spittal, Berwick, traveller; T. Purves, 6 Bank Hill, Berwick, Draper.   No initial public issue.   The number of Directors is not to be less than two nor more than six. The first are J. Black, J. Black, Jun., and G. Black. Qualification, shares remuneration, £10 each per annum.

Almost immediately that same month there was news of a fire at the Foundry -  Fire at Spittal.- On Monday night, between six and seven o-clock, flames were observed proceeding from the Sea View Works - known locally as the Forge, the property of Messrs Thomas Black and Sons, Limited, who carry on the business of spade and shovel makers, agricultural implement manufacturers, etc. An alarm being given, it was found that the fire was in the finishing department, where a considerable amount inflammable material, such paint, varnish, etc., was kept. When discovered the flames had obtained a good hold of the part of the premises where they had broken out, and word was sent for the Berwick fire engine which proceeded at once to the spot. In the meantime, water had been thrown on the fire from a well on the premises, and when the fire engine got to work the flames were speedily subdued.- but not before considerable damage had done to the finishing department, the roof of which fell in, and which generally was ruined.

In 1906 the Works were sold to a Midlands purchaser named Parkes of Birmingham.     The report in the press gave the following description.   At Spittal the firm has borne the world-wide trade mark J. Black, Ford Forge.”    About 1874 the works developed so much that the 1853 machinery had to give place to direct acting steam hammers, instead of the old-fashioned tilt hammers: and then Spittal Forge began to turn out 250 and 300 dozen of spades – up to 3,600 - per week, and to send them to all parts of the World. Handles, too, came to be made on the premises, and so high did Spittal Forge manufactures now stand that at Melbourne Industrial Exhibition, Australia, Spittal came out top alongside Birmingham, and got the first-class Order of merit and Silver medal.

There have been most notable records of long service at Spittal Forge. There are four men with over 50 years. The aggregate service of the seven oldest hands” is 372 years - an average of 53 years each. The oldest is John Park, who, though he in his 90th year, is still able to do his day’s work as a blacksmith and has been 63 years with the firm. The following have over years’ service:—Thomas Richardson, John Moffat, 56 years; and Joseph Ewart, 50 years. Over  40 years, William Rutherford, George Forsyth, and John Robertson, 49 years; Thomas Rutherford, J. Jackson and John Piercy, over 30:  David Purves, 37; James Rutherford, 35. T. Bolus, Works Manager, and Hills, Secretary and Traveller have both been in the service of the firm for about 30 years. [John Park dies in Mrch qtr 1911, aged 94. At the time he was the oldest resident of Berwick and continued working until July 1907, having completed 65 years with the firm – worked as a spade finisher and started off at their Ford works]

During both the first and second World Wars, the Forge was working seven-day weeks to keep up with the demand for tools and equipment. More than a quarter of a million spades and shovels were produced For the Forces as well as output for the home market.    It has been said that in the Second World War some military personnel from Coldstream imprisoned by the Japanese and sent to work on the notorious Burma Railway were quite upset to be given tools made by Black's of Spittal!

However, by the end of 1948 there were clouds on the horizon.   At a Dinner held in Berwick, attended by the Mayor and members of the Corporation, Mr. H.C.Treglown, the Managing Director of the Birmingham firm, spoke of the progress of the firm and how this had been steadily maintained from the previous year with the help and co-operation of all employees.  He was also glad to say that practically every member of the staff was present. Treglown also spoke of the future and of the need to go into modernisation both of plant and buildings.  He had no intention of leaving Berwick, however, but with regard to the acquisition of suitable land and the location, he would have to turn to the Mayor for his help in conjunction with the proposed town planning development already spoken of.   It was stressed by Mr Treglown that the future would be difficult. There were difficult times ahead of them, more competition and more obstacles were bound to crop up, but he was sure that with the steady and continued improvement in the quality of the products of Thomas Black and Sons, Ltd., and the co-operation of all, he had nothing to fear.

Approach was made to Berwick Borough Council in 1949 regarding the transfer of Blacks Spade Works from Spittal to the new Industrial Estate at Tweedmouth.   Discussions continued intermittently, but without much result until an article in the Berwick Advertiser,11th June 1953  announced that  Blacks Spade Works would close at the end of the week.

A short report in the press announced that when the Queen planted a tree at Windsor, she used a spade manufactured by Blacks.

In the meantime, the late Richard Dimbleby had brought his BBC programme “Down Your Way” to Berwick and during the programme he visited the Spittal Spade Works and interviewed Bernard Parkes, the Managing Director.   Richard was invited to watch the manufacture of a spade from start to finish which was a fascinating demonstration of the skills of the workman involved.   A recording of this visit can be found on the FBDMA website under “Film Archives”. - https://player.bfi.org.uk/free/film/watch-come-with-me-berwick-upon-tweed-1952-online

In June 1953 a report appeared in the Berwick Advertiser indicating that business was ceasing for the present but never restarted. By that time 20 people were employed by the company. The statement made by management said “ Owing to the depressed state of trade in the edge tool trade industry, it has become necessary for the present to cease production at the Seaview Works”. It didn’t start again.

Although the business was apparently already on the market, the Town Council  in 1954 began to resume negotiations for the acquisition of land at the south end of Main Street, Spittal, with a view to proceeding with the erection of houses there. They decided on this because of the lapse of time and the lack of evidence regarding the disposal of the Forge premises at Spittal.

The property was advertised in the Scotsman and Berwick Advertiser in August 1954 but only the freehold factory premises, offices, Managers House and 2 acres of vacant land.  No mention was made of the 16 cottages in Main Street, housing provided for some of the workers.

BERWICK-UPON-TWEED FOR SALE BY PRIVATE TREATY Freehold factory premises complete with offices. Manager's House, etc., and having a total floor area of approximately 21,000 sq. ft. together with two acres of vacant land. Good road access. Reasonable offers considered. Full particulars and orders to view may be obtained from; Sanderson Townend and Gilbert, Chartered Surveyors and Auctioneers. 3 A 5, Mosley Street, Newcastle upon Tyne, Tel. 27222. (Also at Darlington and Middlesbrough).

October  1955 (Advertiser)    Town Council planning approval has been given to the outline application for the change of use of the Forge at Spittal, disused for some time now, into a printing and bookbinding works for the Berwick and Duns firm of Messrs. Martins, Ltd., West Street. After this the company then moved from there to Seaview Works where it still operates today as Martins-the-Printers, Sea View Works, Spittal publishing books sold all over the world.